Although this Summer has been a hot and dry one, it has been one of best growing years I have ever had for Sweetcorn. I trialled three different varieties this season and after tasting the third and final variety a couple of days ago I am now ready to report which one was the best. 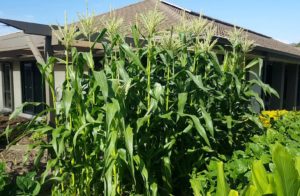 The key to this season’s success was having well prepared soil and an abundant supply of water. The soil preparation was not difficult, and I stuck with my tried and true sweetcorn soil preparation methods, in  a nutshell, preparation consisted of lots or organic compost, pelletised chicken manure, and a pH adjusted with lime to 6.5.

I am fortunate to have a good supply of bore water available and with an automatic water setup the crops were watered every day. On stinking hot days, of which there were many, they received water twice a day. 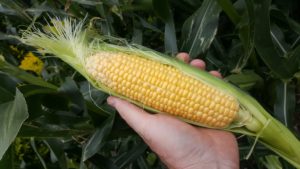 Sown 22 Sep and harvested from 20 Dec to 5 Jan. A real winner in my books and I’d score it 8 out of 10. The taste is good and the harvest per square metre was the beat of them all. I will grow it again in future seasons.

A magnificent golden coloured cob of corn that was not overly sweet but was nice and juicy. It pollinated well and there were very few kernels missing from the cobs. The plants grew 2.3 to 2.5m tall and most of them had 2 cobs per plant. During the growing season there was an abundance of side shoot development that I needed to remove to direct the energy to the main stem. I did find that once it reached maximum sweetness and flavour it quickly started to develop a starchy taste if left unharvested too long. I would recommend that you pick it in its prime. 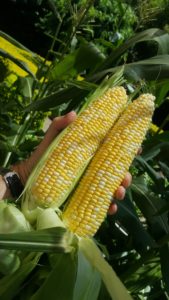 Sown 22 Oct and harvested from 15 – 30 Jan. Only an average producer in taste and quantity. It only managed a score of 4 out of 10 because of the starchy taste and lowest yields, so it missed out on making the ‘grow it again’ list.

As the name suggests, the cobs were a mix of golden and cream kernels and it looked fantastic. They grew to 1.8 – 2.0m tall and most plants only produced one cob per plant. Unlike the other two varieties, it was uneven in height and had the smallest cobs. I was a bit disappointed when I started to harvest them because I found that the taste was a bit too starchy for my liking and the taste did not improve with time. 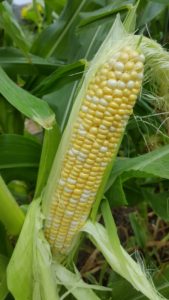 Sown 22 Dec and harvested from 23 Feb – 5 Mar. It also scores 8 out of 10 and the main reasons are because of taste and cob size. Another winner that I will sow again next season. There is another batch of Snow ‘n’ Summer that was sown 13 Jan that is yet to flower that I will harvest in 5 to 6 weeks’ time.

This variety is another type with a mix of golden and cream kernels. I am sold on the beauty of the 2 coloured types and this is no exception. They have grown 2.2 – 2.5m in height and most of the plants have only one cob. Some of the cobs are the biggest I have ever grown – a whopping 25cm long without a single kernel missing. I had so many bees feasting on the pollen I was wondering if there was enough left behind to pollinate the crop, however I should not have worried at all. They tasted sweet and were very juicy. They held their flavour for the longest of all of the varieties but I expect that is because the temperatures were cooling down and the days were not as harsh. 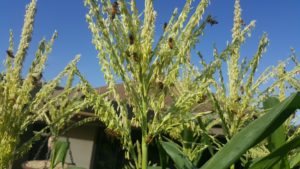 The best variety for this season was 'Max'.  It edged ahead of 'Snow 'n' Summer' because of the yield per square metre.   Both had great taste and both were juicy. So next year I will sow the variety 'Max' and also the variety 'Snow ‘n’ Summer' again. What I need to do now is decide what other varieties I will grow and to help me decide I would be interested in your recommendations of your favourite variety of Sweetcorn and why.  I might just have to add your recommendation it to the list of varieties to try next season

If you want to know how I prepare the soil and fertilize the crop during the season check out this link for some details.