The Colour of Carrots

Last carrot growing season I decided to experiment with a few  of the coloured varieties that are available these days.   I was delighted with the harvest and I reckon that it is a good time to share the results with everyone.  April is the time of the year I sow carrots to ensure that I get the best results.  To find out how I grow them click here. 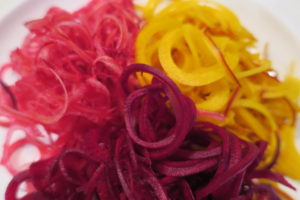 We are used to our carrots being bright orange in colour.  But I reckon that there is no reason to limit yourself to just one colour when you can get a range of reds, yellows, whites, oranges and brilliant purples that you can feast on. The flavours are slightly different depending on the variety that you might have grown, and it's worth experimenting to see which ones you like most.

Recently there appears to be a growing desire to eat different coloured carrots and more and more types seem to be appearing on the lists of the seed suppliers that I use.

Even though coloured carrots have been around for centuries, but it's only the last 10-15 years that breeders have been developing types that are more flavoursome and uniform in size. 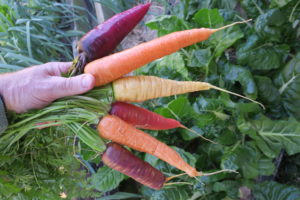 To determine how good the varieties really were, I decided that I would also put in a couple of the regular orange varieties that I have successfully grown to use as a benchmark.  When the harvest was complete I compared them and rated them using the tried and tested Meyles rating standard.  If they scored a 1, it means it was a poor result and I won't be planting this again, a 2 means it's OK and I'll give it another go, and 3 means, absolutely fantastic and I must grow this again.  Some of the varieties I chose were heirloom types and others have been recently bred to meet the current demands of the modern veggie market. 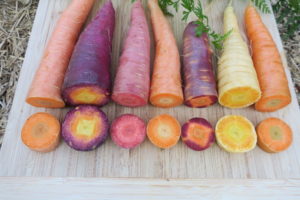 Varieties that I grew are:  (from left to right of the picture)

All Year Round:  A rating of 3. This orange type is the variety I use as a benchmark to compare all other varieties. Without fail produces a good crop every year. Sweet in flavour, smells fantastic when harvested and keeps well.

Atomic Red: Easily a 2.5. Deep red in colour and grows into a large carrot. Colour deepens and flavour improves when cooked. It is also an early producer and even beat the orange varieties in the early production stakes.

Manchester Table: Rates a 2.  Another good orange growing type that produces an even quality crop without fail each season.  Of all the varieties, it had the most forked carrots.

Purple Haze: Worthy of a 2 rating. Deep purple on the outside and bright orange inside, it has a lovely sweet taste especially when raw, however all the colour disappears into the water when boiled. Good size and shape. 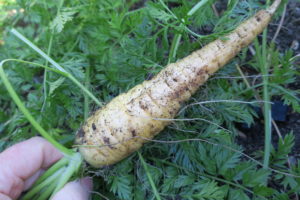 Solar Yellow: Rates a 2.5. It is entirely yellow throughout the carrot and grows into a decent size. Sweet, juicy and very crunchy.

Topweight Improved: Also rates a 2.5. Again, a good orange type with a consistent production each year.

I think that the coloured types are best eaten raw. They retain their sweetness and look fantastic. I can guarantee they will spice up the appearance of any salad you make. 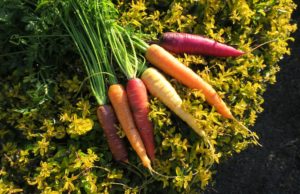 For the records, apparently in a fit of nationalistic pride the Dutch decided that they would only breed orange carrots instead of other colours of carrots to honour the leader of the independence movement, a guy called William of Orange. The Dutch were trying to gain independence from Spain at the time. It must have worked - after 80 years of fighting and eating carrots, the Dutch gained independence from Spain, they then decided that it was necessary for him to be proclaimed William the First - Prince of Orange. Ever since the Dutch have chosen orange as the colour they wear when they celebrate anything patriotic.