How I Built My Strawberry Tower

This season I decided to grow strawberries using a 4-sided vertical tower that stands 1.5m tall with a footprint of 30 x 30cm. 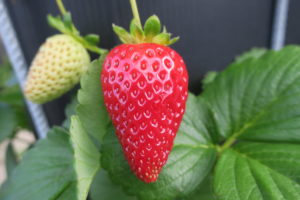 Over the past 2 months I have shared some progress pictures of my Strawberry Tower on Facebook and Instagram and each time I have been asked how I built it. So, as promised, here’s the blog that will reveal all - how I built it, what materials I used and how much it cost. I’ll also let you know what I have learnt and what I will be doing differently for tower number two!

I took several progress shots as I built it so I’ll include a picture or two to help explain it better. 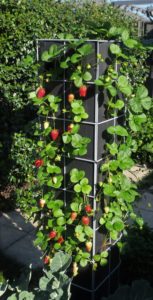 I chose a sunny spot in the garden to locate the tower. I also placed it close to a water source so I could easily connect it up to the automated watering system – in readiness for the warmer months. It is also on top of a garden bed so any excess water can drain freely away.

This is what I did to build the tower. 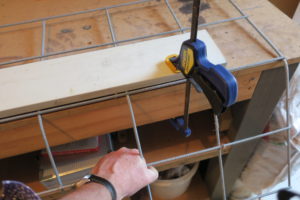 I made sure that the first step of bending the frames was completed carefully. To ensure it bent evenly I fastened the frames to a workbench using a couple of clamps and a piece of timber along the middle of the long edge. I firmly pushed down on the frame bending it a bit at a time until it was bent at 90 degrees along the middle of the frame, I then repeated the process for the second frame. I stood the frames up on a level surface and then connected them together along the long edges using small wire clips. (Wire or cable ties would do the trick too.) I ended up with a frame that stood 1.5m tall with a base of 30 x 30cm.

Cutting the plastic board:

The plastic board is double layered. I laid it on a flat surface so that cutting could be completed easily. I measured and cut the 2.25m length to a new length of 1.5m, which is equal to the height of the tower. This left me with a piece 1.2m wide by 1.5m tall. After measuring 29cm across the width of the sheet, I bent the board 90 degrees using a straight edge. Repeating this four times gave me an insert 29cm x 29cm with an overlap of 4cm, which fit snugly into the tower.

Using cable ties I attached the insert at each corner by piercing the sheet 1cm from the corner, threading a cable tie through the holes and pulling it tight. This step was only to temporarily hold it in place to fill the tower with soil.

Anchoring it to the ground:

The spikes on the frames would not be strong enough to hold it in place when pushed into the ground, so I used a stake or two on the corners and secured it with cable ties. 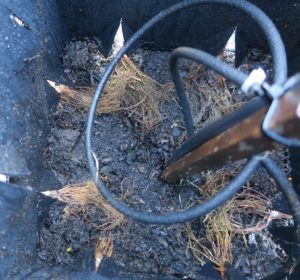 Around the top 60cm of a 1.8m garden stake, I looped a length of weeper tube like a loose spring. At the top end of the tube I attached a dripper. Then I fastened this to the stake using cable ties firmly enough to ensure it wouldn’t slip but not so firmly that the tube would be blocked. From the bottom of the coil, I made sure there was enough length so I could connect it to the tap. Then I placed the coiled garden stake into the centre of the tower and pushed it into the soil deep enough so that the top of the dripper was level with the top of the tower (this dripper sits just above the soil line so I can check the water is flowing). I tucked the bottom length of tube under a side of the tower and attached it to a tap to test it. I only coiled the weeper tube in for the top section because gravity will water the lower sections of the tower.

I used a soil mix with a lot of organic compost in it and adjusted the pH to 6. I also added a slow release pelletised fertiliser. The soil has good drainage capacity. 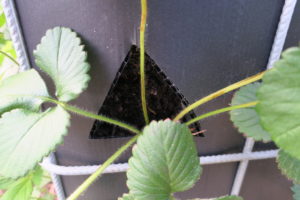 Using a mesh veggie frame made it easy to measure the spacing to plant. Each side has 16 squares, 8 high by 2 across so I only planted the top 12 squares on each side of the tower. In the centre of each square I used a very sharp knife to cut an inverted ‘T’ the size of 6cm for each cut. So I could create a planting hole, I shallow-cut 2 triangular flaps from the top of the vertical to each end of the horizontal cut. I then pushed the sides in, to make a triangular hole. 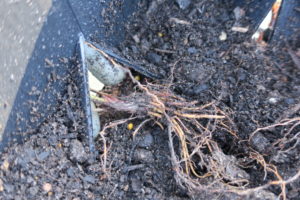 I partially filled the tower with soil to the bottom of the lower row of holes. I pressed the soil down so that it was firm but not too packed. In each of the bottom row of holes I carefully inserted a strawberry plant and spread out the roots on the surface of the soil. I then topped it up with soil to the base of the next row of holes, pressed it down, watered it well and placed the next row of plants in place. I repeated this for each row of holes and eventually filled the whole tower. Into the top I planted a couple of plants and gave the tower a good soaking of water and washed any loose soil off the sides.

None so far. I have plenty of slugs and snails about and I think they are the greatest threat. If they find them I will run a band of copper around the base to stop them from making the journey up the tower.

Once the strawberries formed a couple of young leaves I started to give them a soaking with liquid fertiliser. I plan to do this every 4-5 weeks during the growing season.

What I would do differently:

I would press the soil down a bit more next time because it settles over time and the plants do not line up as well with the holes. Black plastic works well in winter because I want to warm the soil a bit so that the strawberries take off quickly. 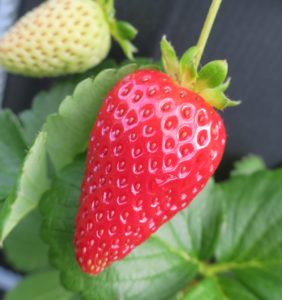 I am concerned that if there is not a good coverage of foliage to shade the tower it may be too hot in summer. Next time I think I will use white board instead of black. I’ll make that judgement in a couple of months.

So, I have shared all the secrets of building a strawberry tower. So far, they have been doing well and I have eaten the first ones for the season. I am thinking of building a second one soon to plant some herbs like thyme, oregano, and rosemary. Not definite yet but I think there is a strong chance I will. Good luck with your strawberry tower endeavours and if you build one, please take a picture and share it on the Hunter Backyard Veggie Growers Facebook page. I’d love to see how you improve on what I have done.