The birth of my veggie patch. Home of Hunter Backyard Veggie Growers

On a long weekend in June in 2009 we moved into our brand new home on a coastal block near Newcastle in the Hunter region of NSW.  A long way from our last home in Hobart, Tasmania.   I had a plan, and that was to create a vegetable garden that would produce fantastic fresh nutritious veggies throughout the year.  It took me some time, but this is how it came about. 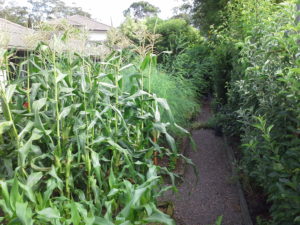 Once the annoying task of moving into the house was behind us, I was able to get on with the fun stuff.  Thinking, dreaming, planning, tinkering, and getting on with the creative process of landscaping the yard and building the long anticipated veggie garden. I was looking forward to getting on with it.

I have always been a grower of things all my life but I had never been handed the challenge of a bare backyard canvas.  What I started with was a totally barren sandy back yard.  Where I live in was once sand dunes and as a result I was presented with a plot that was well drained, and as level as you would ever hope for to start my garden in. 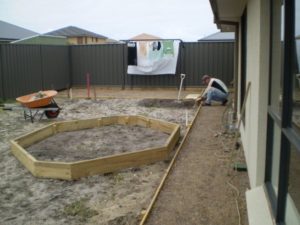 The first thing I had to do was to decide what would suit us.  We both love to cook and eat fresh food with flavour and with good quality fresh ingredients.  So a garden close to the kitchen would make sense.  Herbs in abundance were mandatory as well as fresh veggies.  Fruit trees were optional but would be nice. 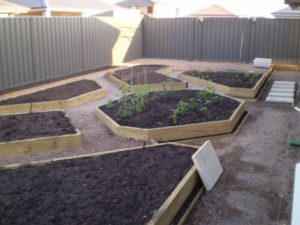 Beds in place and first planting[/caption]

Once the location in the yard was agreed on, the size of the garden was debated.  I wanted to use the whole yard but that was not to be for some reason.  A plot along the back that was 7m wide and 15m long would just have to do.  In the area we decided on I also had to consider where I was to place a washing line and well as a shed.  The orientation was perfectly north south and there would be shading from the house which would impact the garden in the afternoon. 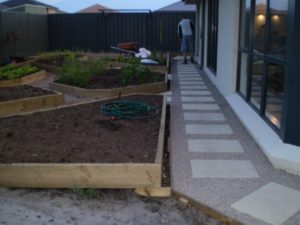 The garden was to be located just outside of the main living area of the house so it needed to be visually attractive as you looked out of the windows.  Being a bit of a neat freak that appreciates straight lines and order a bit more than the average bloke, I wanted the garden to be structured but not so ordered that it was boring.  So for me a garden bed that was all exactly the same size and lined up perfectly was a bit too much.  So I designed a garden with odd shaped beds but at the same time with a balance of symmetry.   The beds needed to be comfortable to reach the centre from any direction without having to stand on the soil. 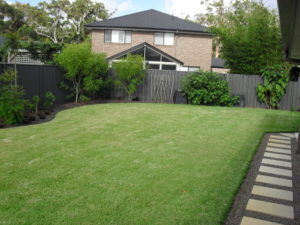 North side one year later[/caption]

Being in climate with summer heat, there needed to be a watering system that would easily keep the veggies alive - preferably automated so I could take off on holidays and not worry about all of my work being wasted while I was away.   Habitat for birds was to be incorporated as well as a place for the good bugs to live. 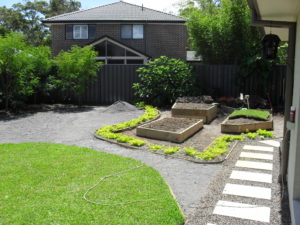 Expansion on the northern end of the veggie garden[/caption]

So, with these important things decided it was time to start.  Out came the measuring tape and a piece of paper.  After a couple of versions I came up with a design that I thought would look good while being practical.  Then the hard yakka was to begin.  Unfortunately by then the summer heat was starting to pick up - but I would have to just work with it.

I selected treated pine for the raised beds.  I built the beds in the garage and transported them to the final site.  They were secured into place using treated pine pegs and before I knew it they were ready for soil.  I chose to buy soil by the truckload and transported it from the roadside to the backyard one barrow at a time.  Once in location, I used all of the old packing boxes from the move and laid them on the bare sand inside the beds.  I filled them with the soil and added more manure and fertilizer.  They said the soil had everything added, but I did not think that there was enough organic matter. 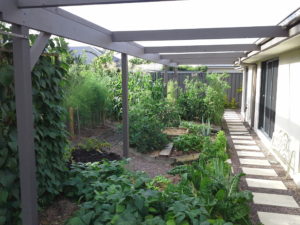 Before I filled the beds I made sure that each one had 2 separate watering systems connected.  The main system for drippers that would deliver bore water to the roots of the plants and a secondary system that would deliver water from my brand new rain water tank via overhead micro sprinklers.  The micro sprinklers were on a timer that would turn on for a couple of minutes at a time that I use for beds that are germinating seed sown directly into the soil.  A must have for the hot days on my sandy soil. 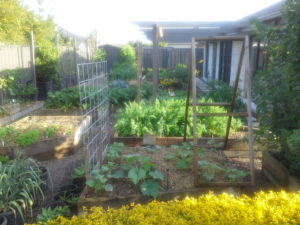 Almost six years on and I am delighted with the result.   I did manage to expand the size of the garden by an additional 5 beds a couple of years ago and I now think that I have a patch that is big enough.  I have had to experiment with a number of crops because of the new climate I find myself in, but that is part of the fun.  Plenty of new bugs and pests to contend with in the Hunter region that I have never experienced in my life before, but that just adds to the challenge of growing and I would not have it any other way.

So here it is, the home of Hunter Backyard Veggie Growers.   I have got to admit, I am delighted with it. I am glad to be able to share it with you.