Broad beans were not my favorite vegetable to eat as a kid.  In fact I really hated them.   If I was to stop and think about it, I can still hear the grumbling sound that a table full of kids makes while seated around the dinner table just as a bowl of steaming hot broad beans gets placed in the middle for everyone to eat.  Sorry mum, but when a bowl of big, tough and leathery broad beans is placed in front of me I still cringe. 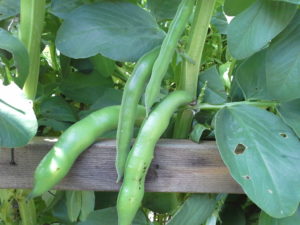 It has taken a number of decades for me to overcome this childhood trauma and pluck up the courage to try to grow some broad beans.  Being the brave and adventurous gardener that I am, I decided to grow some.  I let my guard down just once and in a moment of weakness, bought a pack of out-of-date seeds that had been marked down in a supermarket. To be honest, I said to myself, “Why not – if they don’t produce I can at least dig them in for a green crop”.   So I came home, dug up a bed and threw them all into the ground and secretly hoped that they would all rot rather than germinate.  But they all came up – every single one!  In fact they thrived and grew to over two metres in height and produced more broad beans than I would ever hope for. 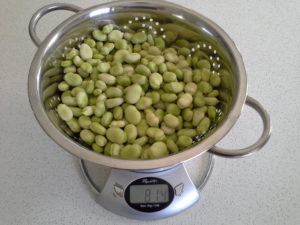 So the inevitable day arrived when I had to start to harvest the beans.   Of course, as luck would have it there were plenty of them ready to eat too.  Growing and harvesting them is one thing, but I had to pluck up the courage to have some for dinner.  So I split the pods and gathered a cup full of beans and dropped them into boiling water.  When I thought they were cooked enough, out of the pot they came, and onto my plate.  Inwardly cringing, I slowly raised a forkful of the beans toward my mouth. As I did, all I could hear in my head was the sound of a table full of kids grumbling about what they were about to have to eat.

However, it is time for a confession; I was pleasantly surprised that I was actually enjoying them.  They were quite good.   Yep, they were.  I have been able to overcome my childhood trauma and eat broad beans.  In fact to prove my trauma is well and truly behind me I have grown more of them since - even grown enough to freeze to extend the season!  It’s true – I am a convert to broad beans!

But, and there is always a ‘but’ in every good story.  I learnt that you have got to pick them young and not let them grow so big that they develop a tough and leathery skin.  That was the issue with the beans my mum served up.  They were too old and tough!  She had to boil the living daylights out to them to make them slightly edible.  I suppose she was trying to feed a house full of hungry kids and growing the beans to full size made more sense than picking them only half size. 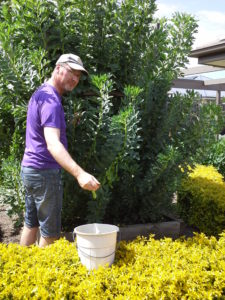 My second crop grew so well I was able to freeze plenty for soups and stews.  It was a great looking crop, as well as being a delightful veggie to harvest.  Being a smart grower of broad beans I thought that it would be sensible to grow a dwarf crop.  Although the packet said 1 metre tall they grew to over 2 metres in height.  They did grow well for me and I only had a small outbreak of black aphid that I sorted early enough before it became a real problem.  The birds loved them; in particular the Eastern Spinebill Honeyeaters who would frequent them every day for a feed when they were in flower.

So that is my broad bean saga everyone.  If I could, I would tell my mum that I now quite enjoy them.  However, this revelation does leave me with a dilemma – should I pluck up the courage to try parsnips or brussel sprouts.............maybe or maybe not. 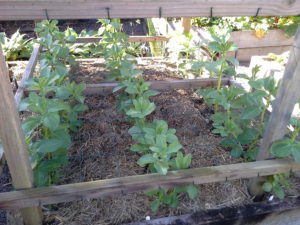